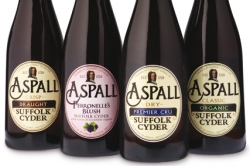 Want to know how to kick start a family business? Ask Barry…

…or us for marketing it course, but for the purposes of this blog, we have the inside line from the man who has done it for his heritage family business, Aspall – makers of ciders, vinegars and fruit juices.
Founded in 1728, Aspall has been handed down through 8 generations of the Chevallier family, but when Barry and his brother Henry took over from their father in 1993 they were faced with some major challenges and some big ambitions. Barry shared the story of the last 18 years at Platform on Tuesday night.
Perhaps the biggest surprise to me was that Aspall did not begin life as a brand: From day one it was the name of the company – originating from Aspall Hall where the family has resided since 1702 – but as the brand that we know today, it only emerged as a result of the brothers’ initiatives. The plotted business history runs through a heritage of single-apple cider (or Cyder as Aspall say); to the commercialisation of the cider by-product, vinegar, in the 1970’s era; and an extensive supply of high quality supermarket own label products. It was only in the mid-90s that Aspall became a brand – after much time and thought was invested in creating the very best apple-blend cider and a premium looking bottle – one designed from a bottle the brothers’ great grandfather used in the 1920s and 30s.
Now the business is thriving with a 6 fold increase since Henry and Barry joined 18 years ago, and is projected to continue to grow significantly with international expansion. Barry highlighted three key factors that he believes fuelled the business growth:
Unrelenting, uncompromising focus on a great, high quality product.
Barry explained that  the bottle has actually slightly changed since 2000 because they had to take cost out of the product somewhere to account for the increasing cost of raw materials. Because they would never decrease the quality of the actual product in the bottle, they instead optimized the bottle shape.
Invest in people.
Until a few years ago, Aspall had only ever had 4 sales people – ever. Now they have a team of 10 dedicated to sales. Barry explained that being in a family business (very like being in a startup) you usually become a jack of all trades – and don’t always hire classically trained people. The brothers changed this, delegated to the experts, and Barry is very modest in sharing his admiration for ‘properly trained’ sales people. As an added insight, Barry also encourages others to hire before you quite need them, as you never find the right people in a panic.
Stick to your guns.
People told the brothers at numerous points that they were doing the wrong thing… something I am sure is quite prevalent with a 200 year old business! But they stuck to their guns and made the difficult decisions.
For me, it feels like Aspalls is a superb example of the power of the brand – where shifting focus from being a production company to becoming a branded business made a huge step change for the business.
And finally… my favourite sound bite was Barry recalling a story from his father’s days running the business, when they supplied a vast range of own label vinegars to a major supermarket. On the phone to the buyer one day he was asked if they could produce red and white wine vinegar. His father’s answer was of course yes… and on putting down the phone he set to on trying to find some! A true demonstration of that entrepreneurial spirit.